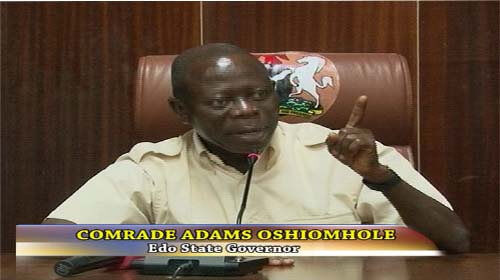 The Governor of Edo State, Comrade Adams Oshiomhole, has said that he would handover to a governor who has passion for the state and elected on the platform of the All Progressive Congress (APC).

Describing an ideal successor, Oshiomole said he must be a person that has managerial competence to drive and ensure that the state witness more growth and development than during his tenure.

The governor told journalists that it would be an easy defeat for the People’s Democratic Party (PDP) in next year’s governorship election.

He said his administration has rediscovered the state and gave the people confidence that Edo is viable.

“The problem we are having in Edo today is that PDP cannot show you one clean road with street light, with drainage that they did that is still there. The only thing you can see are the ones Ogbemudia did. If the PDP had laid some foundations we would have gone far today, we started form minus and minus to zero.”

Use Of Any Finger During Election Can Promote Rigging – Taiwo...

Chris Brown Tells Scott Disick To Be A Better Dad

Welbeck Back For Arsenal