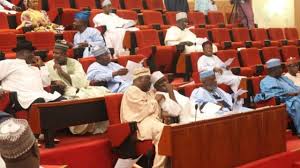 The Senate said it would initiate a bill for a law to make Nigeria Financial Intelligence Unit (NFIU) of the (EFCC) autonomous.

This is coming on the heels of the suspension of Nigeria from the Egmont Group of Financial Intelligence Units, the highest inter-governmental association of intelligence agencies in the world.

The Senate said it would make the unit legally and operationally autonomous with powers to employ, reward, train, promote and discipline of its workforce independently.

It also resolved to empower NFIU in line with international best practices, to exchange and relate with all countries on issues affecting its mandate at bilateral levels.

These resolutions followed a motion on “Dire implications of the suspension of Nigeria from the Egmont Group of Financial Intelligence Units” sponsored by Chairman, Committee on Anti-Corruption and Financial Crimes, Sen. Chukwuka Utazi.

Utazi said that Nigeria was suspended until January 2018 at the group’s meeting in China earlier in July, and that the group threatens to expel the country if it failed to meet the standards of financial intelligence operations.

According to Utazi, Nigeria’s suspension from the group was because the NFIU has not been granted operational autonomy and the unit was still domiciled within the EFCC.

Another reason, he said, was the meddlesomeness of the Acting Chairman of EFCC, Mr Ibrahim Magu, in the affairs of the unit, explaining that Magu was interfering in the operations and staffing of the unit.

He noted that by virtue of Nigeria’s membership of Egmont group, the country enjoyed privileged information which was crucial to the universal and local war against corruption and terrorism financing.

The committee chairman said that one of the immediate effects of Nigeria’s suspension from the group was that the Egmont Secure Web had been shut against Nigeria.

He said that apart from the suspension, the group had given Nigeria up till December to address the issues or be expelled, adding that this would attract international sanctions against the country’s financial system.

“Nigeria can ill-afford to be blacklisted as the implications are dire, not only to our aspiration for membership of the Financial Action Task Force (FATF) into which so much energy and time have been invested.

“An expulsion might also, under certain conditions, attract the imposition of financial transaction limit, including the withdrawal by some countries of scholarships to students of Nigerian origin,” he said.
Utazi lamented that the effort of the committee to avoid the suspension was not complemented by the executive arm of government.

He said, “We will not renege; this is the Senate of the Federal Republic of Nigeria and we are going to live up to the billing of this body and ensure we do things rightly.”

Supporting the motion, Deputy President of the Senate, Sen. Ike Ekweremadu, said that based on the matter, there was a huge debate by the 7 Senate.

“The NFIU used to be a department in the EFCC. So what they do is to gather financial intelligence about bank transactions.

“And, because they get international funding and they are very influential, there was a huge debate where to domicile it, whether in the CBN or Office of the Attorney-General. There was an inter-agency rivalry.

“Egmont is complaining that all the staff members of NFIU are all from EFCC; they said this was not right.”

Tania Omotayo Surprised By Gifts From Wizkid, Morning Of Her Birthday