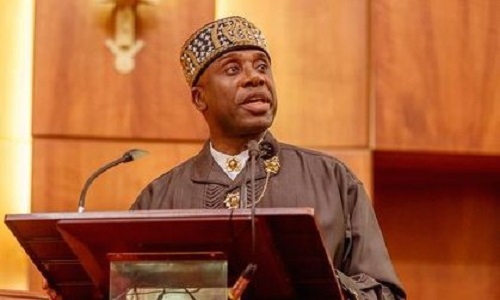 Senator Shehu Sani representing Kaduna Central Senatorial District said yesterday that last week’s confirmation of immediate past governor of Rivers State, Rotimi Amaechi, as a minister by the Senate, was not a tacit endorsement of corruption.

Sani spoke during a visit to ailing Abdulkareem Albashir, a veteran journalist and columnist, during which he offered to settle his medical bills and procure an artificial limb for him.

The senator pointed out that the allegation of corruption against the former governor remained a mere accusation until proven otherwise in court.

Amaechi faced stiff opposition on his way to becoming a minister-designate following his alleged indictment by a panel constituted by the Rivers State Government to probe the sale and proceeds of some of the state’s assets during the former governor’s administration.

His screening, which was postponed twice and subsequent confirmation, has been described by the Peoples Democratic Party as a mockery of the anti-corruption stance of the APC-led federal government.

Sharing his views on the Amaechi saga, Sani said: “The All Progressives Congress’ (APC) position on corruption allegation is that it is still an allegation and the issue is still in court which the Senate committee should not have entertained in the first place.

“In the general sense, we are duty bound to protect the interest of someone in our party and the opposition has the right to object to whoever is presented.

“In the broader sense, Nigerians and posterity will judge whether our approval of Amaechi was a tacit endorsement of corruption because the issues raised were not enough to stop his confirmation.

READ  Youths Should Join Politics And Make A Difference — Dabiri-Erewa

“But we must also understand that even if you are made a minister and you get convicted, the law will take its course.

“Certainly if he is found guilty, he would not continue to serve as minister under President Muhammadu Buhari’s administration”.

On the walkout by the opposition senators under the PDP, Senator Sani said their action was part of democracy and recalled that a similar incident happened when the APC was in the minority in the 7th Senate.

His words: “I think nothing is wrong with that. I see the walkout by the PDP senators as history repeating itself.

“Opposition senators walked out when Mr. Musiliu Obanikoro was brought in for screening for ministerial position by the previous administration.

“You remember that their protest did not stop the ruling party from having its way”.

Rohr Is Blessed With A Good Super Eagles Team – Enyeama

Law Making Not A One-Off Process But Continuous One – Osun...

Buhari’s Method Of Getting Social Media Following Through Adverts Is Deceitful...

The Last Few Days Have Been Difficult – Marco Verratti

There Will Be A ‘Jumanji’ Remake – The Rock