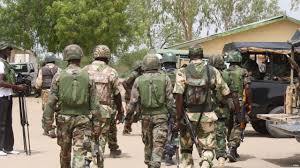 In a statement issued on Saturday by the Director of Defence Media Operations, Major General John Enenche, the troops also injured several other suspected armed robbers during the encounter.

According to the defence spokesman, the incident which occurred on November 25 along Angul Maraban Jama’a road, led to the recovery of one locally fabricated pistol.

“During the encounter, one-armed robber was neutralized by their own troops. Items recovered in his possession was one locally fabricated pistol while others escaped with gunshot wounds.”

He also called on members of the public to avail the troops of timely information in order to rid the nation of the several security challenges.

#Nigeria > President Buhari Congratulates Most Rev. Idowu-Fearon On Commissioning As...

#NigeriaDecides: We’re Not Under Pressure To Declare Elections Inconclusive – Jega

7 Things You Should Know About Tor