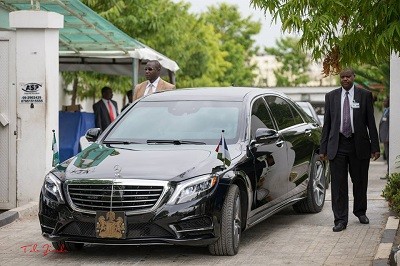 In line with the mantra of change and his administration’s promise to ensure judicious use of public funds, President Muhammadu Buhari has turned down a proposal to purchase five new bulletproof Mercedes S-600 (V222) cars for his use at a cost of about N400 million.

The president reportedly rejected the proposal when the permanent secretary of the State House, Nebolisa Emodi, briefed him on Wednesday.

Ordering that the proposal to procure the cars be dropped, Buhari explained that he didn’t need new cars since the ones he inherited from former President Goodluck Jonathan are still in good shape.

According to a top presidency source who disclosed this to State House correspondents last night, President Buhari however, welcomed other initiatives presented by Emodi to reduce the running cost of the State House and strengthen its finance and accounts internal control mechanisms.

See also  NDLEA Siege: I’ve Nothing To Do With Kashamu’s Ordeal – Bode George

The source at the briefing, who spoke on condition of anonymity, quoted Buhari as telling the permanent secretary: “I don’t need any new cars. The ones I’m using now are just fine.

“Greater effort be made henceforth to capture all State House expenses within the approved national budget, to avoid the frequent recourse by past administrations to presidential intervention funds”.

Confirming the development, Senior Special Assistant to the President on Media and Publicity, Malam Garba Shehu, said Buhari’s decision was in keeping with his commitment to prudence in the management of national resources.

Shehu added that Buhari wanted to continue using the cars he inherited from Jonathan, which explains why he withheld approval for their replacement.

See also  INEC Bows To Pressure, Puts Creation Of 30,000 New Polling Units On Hold Till After 2015

The post Buhari Turns Down Proposal To Buy N400m New Bulletproof Cars For His Use appeared first on INFORMATION NIGERIA.

Chelsea Must Be At Their Best Vs Lille – Lampard