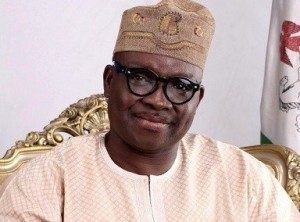 An Abuja High Court on Friday, reserved ruling till July 19 on a bail application filed by Abiodun Agbele, an aide to Gov. Ayodele Fayose of Ekiti.

Agbele was alleged by the Economic and Financial Crime Commission (EFCC) to have laundered N1.2billion from the office of the National Security Adviser.

The judge, Justice Olukayode Adeniyi, reserved ruling after listening to the submissions from the counsel in the matter on the bail application

Agbele through his counsel Chief Mike Ozekhome (SAN) filed a suit alleging breach of his fundamental human rights by EFCC.

He claimed to have been detained since June 27 and prayed the court to award the sum of N500million as compensation for his unlawful detention.

Ozekhome told the court that EFCC did not say that Agbele paid money into his own account rather that he paid the money into peoples account.

He said it was wrong to detain a suspect and begin to look for evidence or carry out investigation.

“EFCC got a warrant of remand on June 30 from a Magistrate court in Lagos pursuant to section 293 of the Administration of Criminal Justice Act of Lagos.”

He said that they should have arraigned him within 48 hours as stipulated by sections 35 (5) of the 1999 Constitution (as amended), which is inconsistent with the provisions of sections 293 of the ACJA because the constitution is superior.

He said that an administrative bail was granted him with stringent conditions and that EFCC went back to the same Magistrate court to obtain another order after the expiration of the 14 days given.

Ozekhome therefore urged the court to grant him bail on self recognition or on liberal terms because he has not been proven guilty.

Mr Andrew Akoja, EFCC counsel in his opposition alleged that the issue of breach of fundamental rights did not arise at all.

He said he admitted that the Magistrate court may be an inferior court to this court; however, the statute has bestowed power on that court.

He, therefore, urged the court not to grant bail to the applicant; saying that treason before now was perceived to be the highest offence in the country, but now corruption is the highest.

Akoja told the court that it does not have jurisdiction to entertain the matter because the offence was not committed within Abuja.