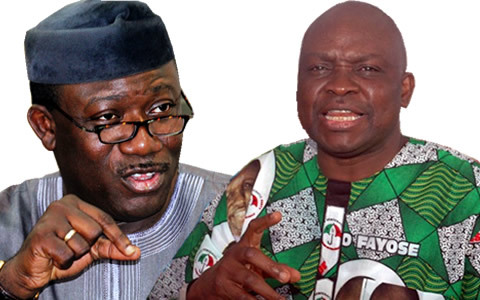 The sale of a house at the Irewolede (Fajuyi) Estate along Ilawe Road, Ado Ekiti, to Mrs. Bolu Fayemi-Ayodele, elder sister of former Governor Kayode Fayemi, has been revoked by Ekiti State Government.

Mrs. Fayemi-Ayodele, who was served with the letter conveying the revocation order on Thursday, vowed to challenge the action in the court of law.

The former governor’s sister received her revocation barely 24 hours after the Corporation in a letter by its lawyer, Br. Awe, revoked house sale to the Chairman of Irewolede Residents Association, Ayo Orebe.

Confirming the receipt of a letter revoking the sale of the house she purchased on mortgage in 2011 in a telephone chat yesterday, Mrs. Fayemi-Ayodele described the action as “politically motivated”.

“The house in question is not a rented house, it’s my personal house which was purchased on a mortgage which still subsists even though I have not completed payment. I am going to court to challenge this latest action because a case is already in court over the last eviction and if there is any case in court, parties are not expected to take any action until the case is disposed of.

“When I read the content of the letter, I told the bearer that all that was written in the letter are fallacies. I know that the action was taken because he (Fayose) believes that I am a sister to the former governor (Fayemi) and he feels that he can do anything he likes. I believe that action was politically motivated”.

Jay Z Should Not Mess With My Parents – George Zimmerman