Fayemi’s Successor Will Honour Or Desecrate His Legacies – Soyinka 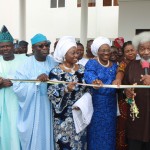 Nobel Laureate, Prof. Woke Soyinka has said that outgoing Governor of Ekiti State, Dr Kayode Fayemi, has placed the State on an honourable footing by the various programmes and legacy projects he has put in place, adding however, that the decision to toe Fayemi’s honourable path is the choice of the Governor’s successor.

The Nobel Laureate who commissioned the new Government House christened ‘Ayoba Villa’ in Ado Ekiti on Sunday said the new Governor’s lodge is now open to the next governor of the State to “either honour or desecrate”.
Soyinka who noted that Ekiti State has known very honourable people such as the late Governor of the old Western State, Adekunle Fajuyi, stated that he had been watching Fayemi and he was happy that the outgoing governor did him proud.

He urged Ekiti people not to lose hope of having another governor who would yet again be “honourable, intelligent, committed and humanistic rulers”.

Soyinka said: “I have known you, I am watching you and I am proud of you. This building here, this edifice, has known honourable people. This edifice, I know it didn’t exist at the time I want to speak of very briefly but I am talking about the seat of government in Ekiti state. It has known honourable, brave, intelligent and committed people like for instance Adekunle Fajuyi. My hope is that it will after the departure of Kayode yet again know honourable, intelligent committed humanistic rulers. Don’t despair, don’t give up. I have the honour and the delight of opening this building and also applauding the gesture that it is being done without the slightest rancour being done to leave it open to a next governor to either honour or desecrate. The choice is his”.

Soyinka who expressed bewilderment at the outcome of the June 21 election advised the people to put aside all the mysteries surrounding the loss and continue to build on the “good foundation” Fayemi had established.

He stressed that Ekiti State had been “resurrected from its dull state by the Governor’s good works” adding that the joyful atmosphere that permeated the event was an indication that the mysteries surrounding the Governor’s election defeat will be unravelled.

In his remarks, the Speaker of the House of Representatives, Hon. Aminu Tambuwal said Posterity would be a better judge that Fayemi ruled Ekiti state in dignified ways to the extent that he left indelible marks in the State.

Tambuwal added that Fayemi combined good governance and politics; saying that despite losing election, the governor still continued to deliver dividends of democracy to the people.

He expressed optimism that the successive administration will continue where Fayemi stopped.

Earlier, a church thanksgiving was held at the St. Patrick Catholic Cathedral, Ado Ekiti for the successful completion of the 4-year term of the Fayemi-led administration which is the second time a governor would complete his tenure since the beginning of civil rule in the State in 1999.

In his homily, the Vicar General of Ekiti Catholic Diocese, Most Revd Felix Odesanmi had commended Fayemi for his consistency in gratitude to God even as he recalled that the Governor had on assumption of office in 2010 come to give thanks and gave thanks while leaving office.

The assistant Bishop of the Ekiti Catholic Diocese added that the Governor’s achievements would continue to speak because he is leaving Ekiti better than he met it.

Odesanmi said the Governor had served the State with integrity, love and commitment.

In his remarks, Governor Fayemi who read the second lesson from Philippians 4 verses 12 to 20, thanked God for helping him successfully complete his tenure and fulfil the promises he made to Ekiti people.

The Governor who said that it was the extraordinary grace of God that made it possible for him to be Governor of Ekiti State which was an opportunity for him to serve the people added that the Ekiti success story had not yet ended.

Fayemi while saying that everything that happened in the State under his Administration was about moving Ekiti forward so that it could be better than what he met, added that it is left to the incoming administration to either honour it or desecrate the service done to the people.

He stated that honour, integrity, compassion to the people had guided his government in the last four year even as he thanked the people for their support.

“For us, the job is not finished. It is not yet over. We are committed to deepening democracy in this country. We are not tired of serving our people and we will continue to offer service to our people. You can see this building. It shows that we did not just start strong, we also finished strong. We have not concluded. We re on a journey. We are not yet at the destination. We will keep moving until a greater Nigeria, a Nigeria of our dreams becomes a reality”, the Governor said.

Others are the Bishop of Ondo Catholic Diocese, Most Revd Jude Arogundade, his Ekiti counterpart, Most Revd Felix Ajakaye, retired Bishop of Ekiti Anglican Diocese, Rt. Rev Samuel Abe, the Alaaye of Efon,  Oba Emmanuel Aladejare, the Oluyin of Iyin Ekiti, Oba Ademola Ajakaye and the Alare of Are Ekiti, Oba Boluwade among other important dignitaries.

I Am Not Planning A Return To PDP – Abdulfatah Ahmed

Google Glass now Available for sales in the US