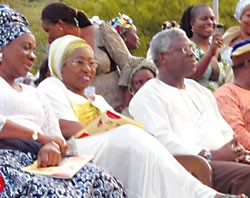 L-R: Adelabu, Erelu Fayemi and Osundare at the event

Unlike the proverbial Biblical prophet that is appreciated only in distant lands, renowned poet, Prof. Niyi Osundare, was honoured in his own land on Thursday. The New Orleans, US-based scholar and king of similes and metaphors was the star act at an ‘Evening of Poetry’ held at the Ikogosi Warm Springs and Resort, Ado Ekiti.

The large audience that listened to him read and perform several poems from his many collections were the biggest beneficiaries. Yet, the event, which was one of the highlights of the Ekiti State Festival of Culture and Arts Expo held last week, was so symbolic to Osundare that he felt he was the biggest beneficiary.

He told the audience, including the Deputy Governor, Prof. Modupe Adelabu, and wife of the State Governor, Erelu Bisi Fayemi  – who recently presented two books – that it was one of the most memorable shows he had ever been a part of.

The multiple award-winning writer said, “This is the first time any government of my state has invited me to share my poems with my people. One has been in all parts of the world reading to white people and those of other colours. But this is where the talent began. It is the landscape of Ekiti that produced the mindscape.”

He commended the Kayode Fayemi government for what he described as the positive steps it is taking. According to him, any government that recognises the place of culture in national development will do everything to promote it.

“A lot is happening in our state,” the Ikere Ekiti-born Osundare noted. “I see promise. This resort where we are gathered is one of these. We have not got to where we are going, but this is how change begins. Developed countries are culturally advanced, as we have in the case of Japan. Science does not stand in the way of culture. Culture does not stand in the way of science. Science is culture, culture is science. Consider the example of Ifa. Ifa entails physics, biology, geography, medicine, economy and all. For a long time we have been looking at the sky for what is in our pockets.”

He took the first poem he read – Invocation of the Word – from his poetry book, The Word is an Egg. It is a homage to the spirit of word, with the poet arguing that although in the beginning was the word, the word itself was the beginning. This was followed by ‘The Rocks Rose to Meet me’, a celebration of the acrobatic rocks that adorn his Ikere Ekiti hometown landscape.  It was taken from The Eye of the Earth, which earned Osundare the Commonwealth Poetry Award.

But the poet, who laced his rendition with folk songs, for which he enlisted the audience to sing along, also proved his versatility in theme and style when he read a love poem from his collection, Tender Moments and an ewi – a Yoruba poem he titled Ewi Adamo. He received a standing ovation at the end of the performance.

As the title of one of her books, Speaking for Myself, suggests, however, Erelu Fayemi also shared some experience with the audience. She read passages from the book that not only documents her personal history but also captures the fierce battle that her husband, Gov Fayemi, had to fight before regaining his mandate earlier stolen by riggers. Although the passages are laced with satire and humour, they reminded the audience of the Ido Osi/Ayoka Adebayo saga, when rigging assumed a rather turbulent proportion in the 2007 election.

The Ekiti ‘first lady’ also read a poem, The Day the Devil Came to Drink Water, transliterated as ‘ojo buruku esu gbomi mu’, which also seeks to capture the climax of the political struggles.

“The poem was inspired by popular filmmaker, Tunde Kelani. He hopes to turn it into a script,” she said.

So interesting was the programme to the deputy governor that she had to hold back tears of joy.

Adelabu, who also encountered one of her former students at the Obafemi Awolowo University, Ile Ife, who also performed at the event, said, “This is one of my best nights in years. I almost shed tears. Indeed, it is the good day that angels came to drink water. I am more than excited. We are all energised. We saw the past. We have witnessed the present and we hope for a brighter future.”

The Commissioner for Culture, Arts and Tourism, Chief Mrs. Ronke Okusanya, who anchored the programme, also told the readers, “What you have given tonight is priceless. I will never forget today.

Your words will remain indelible in the sand of time.”

The EKITIFEST 2013 encompassed a colloquium, play reading by Prof. Femi Osofisan, a lecture delivered by the Centre for Black and African Arts and Civilisation, Prof. Tunde Babawale, traditional dances, visits to cultural/tourism sites and a ‘women extravaganza’.

This articles was first published in Punch

I Now Adore A Friend I Betrayed – Tonto Dikeh

Oxlade-Chamberlain Will Be Out For The Majority Of The Season –...