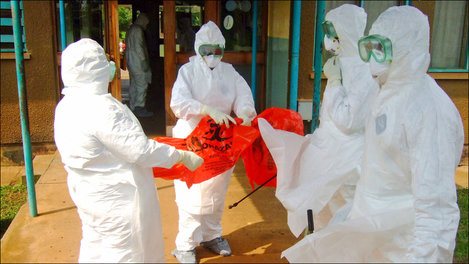 The Minister of Health, Onyebuchi Chukwu, on Wednesday described the Ebola outbreak in the country as a “national emergency”.

Mr. Chukwu made the statement at an emergency meeting convened by the House of Representatives Committee on Health over the Ebola outbreak in Abuja.

He said that out of six Nigerians diagnosed with Ebola virus, one had died on Tuesday, adding that the other five patients were receiving treatment.

The minister said that everyone in the world now was at risk, adding that the experience of Nigeria had opened the “eyes” of the world to the reality of Ebola.

Mr. Chukwu faulted a report on the curative powers of Bitter Kola on Ebola.

According to him, there was no empirical evidence to show that bitter kola will prevent or cure Ebola.

Commenting on the issue, the Project Director, Nigeria Centre for Disease Control, Abdulsalami Nasidi, disclosed that 70 Nigerians were currently under surveillance for the disease.

Mr. Nasidi said that Patrick Sawyer arrived Nigeria about two weeks ago, had 70 primary and secondary registered contacts of which 39 were hospital contacts and 22 airport contacts.

The Director, Port Health Services in the Health Ministry, Sani Gwarzo, said that restrictions had been placed on the repatriation of corpses of Nigerians abroad into the country.

He said that this was part of efforts to contain the Ebola outbreak in Nigeria.

Mr. Gwarzo said that more personnel were required by the health ministry to man and screen travelers at the country’s several travel entry.

Earlier, the Chairman, House Committee on Health, Ndudi Elumelu, said the committee reconvened to find out how many Nigerians were infected with Ebola.

He explained that the committee also sought to know what the ministry had been doing to curb the spread of the virus.

According to him, Ebola is what most Nigerians are currently worried about; measures must be taken to protect Nigerians.
(NAN)

Xero Appoints US CEO, Board Chairman and Director as It Continues...

Putting a Number on It: How to Determine the Worth of...

Leganes Can Avoid Relegation Without The Fans – Omeruo