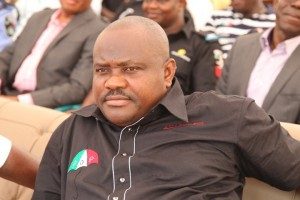 The Rivers State Chapter of All Progressives Congress (APC) said it has come to its attention that the Rivers State Governor, Nyesom Wike this week mobilized a group of PDP members and sympathisers with the sum of N25m to go and protest at the Independent Electoral Commission [INEC] Headquarters, Abuja.

The APC in a statement signed by is its Spokesman, Senibo Chris Finebone said, “This condemnable action is part of the wild goose chase by the governor to stop Senator Magnus Abe at all cost from consummating his expected victory in the suspended Rivers South-East rerun election whenever it is concluded by INEC.”

Continuing, the party noted that earlier in the week, the Rivers State chapter of the PDP, through its State Publicity Secretary, Samuel Nwanosike, addressed a national press conference where the party unjustifiably lampooned the INEC especially one of its national commissioners, Mrs. Amina Waziri, for only God-knows-what offences.

The APC maintained that it has every reason to believe, and justifiably so, that all these developments stem from Gov. Nyesom Wike’s obsession to stop Senator Magnus Ngei Abe from actualising his victory in the Rivers South-East Senatorial rerun elections.

The party recalled that the orchestrated campaigns sponsored and funded by Gov Wike against the nation’s security agencies especially the Nigerian Army in Ogoniland is all part of the agenda by the governor to blackmail and stampede the Army out of the area to create an enabling environment for the takeover of Ogoniland by Wike’s Army commanded by Solomon Ndigbara in order to prepare ground for undermining the electoral franchise of the good people in the area which obviously favours one of their brightest lights, Senator Magnus Ngei Abe.

The APC stated that “without fear of contradiction that the issue of March 19 rerun election in Tai LG does not deserve to become the subject of controversy as being painted by the PDP and Gov. Wike. It is to the knowledge of all that during the rerun elections, results were successfully collated in Tai and duly announced by the Returning Officers. It is on that basis that the APC Rivers State House of Assembly Candidate, Hon. Matthew Dike is believed to have handsomely won that election. It is also on the basis of results announced at the collation stage that the figures of votes for Tai for the House of Representatives and Senate also became known. But it is INEC and INEC alone that can make the results public, not the APC or the PDP.”

The ACP considered what it described as the “different subterranean and overt attempts” by Gov. Wike and the PDP to, directly and indirectly, extend their scare tactics to INEC in order to exact a favourable outcome through arm-twisting as devious, condemnable and will fail, adding that “the undeserved media assault on INEC especially Mrs. Amina Zakari is misplaced and therefore dangerous.”

The APC called on Gov. Nyesom Wike to stop forthwith all forms of anti-Abe agenda he is fostering in Ogoniland.

“This has already led to needless killing of APC members in the area, one of the victims being late Dr. Vincent Eebee who has just been interred this afternoon. Many more of APC members have been killed and their homes razed across the Ogoni axis before and after the killing of late Dr. Eebee” the party concluded.