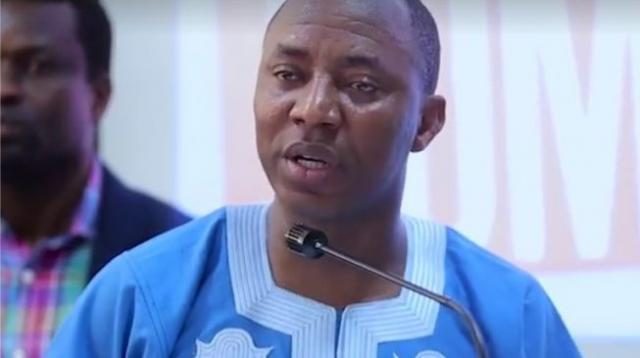 Ex Presidential aspirant, Omoyele Sowore has had his say on the RevolutionNow protests which happened in parts of Nigeria.

The recently released Nigerian also said he is finally in good health after his arrest experience.

Omoyele, who turned down meals given to him by the secret police, thanked Nigerians and the international community for their support, begging them to storm the street in protest against bad governance in Nigeria.

His words, “I would like to assure everyone that I am being treated well and in very good health.

“I am pleased that the peaceful #RevolutionNow protests went ahead.

“However, knowledge of the sheer number of innocent Nigerians being arrested for exercising their civil rights bothers me.

“I join others in demanding for the immediate and unconditional release of all those arrested by the police on Monday.”

Director, Media and Communication of the movement, Rachel Onamusi-Kpiasi also confirmed that Sowore was in high spirits.

Her words, “At 6pm today, members of the Take it Back Movement were allowed to visit with our convener, Omoyele Sowore, for the first time since his armed abduction in the early hours last Saturday, August 3.

“We met him in high spirits, unmoved by the events of the last few days. The officers allowed us to present him with food as Sowore had refused all meals since his capture.

“We are also happy to confirm that Take it Back members will be allowed to bring him food daily as per his wishes.

“The freedom fighter was quick to ask about the movement and supporters as he is aware that there will be a lot of worry about his wellbeing.

“Indeed, the silver lining in today’s unrest lies in the knowledge that truly, you cannot stop an idea whose time has come.

“The Take it Back Movement will continue to agitate for his release as well as that of comrades whose voices this oppressive regime has tried to silence.

“This visit was a small win, but we will not rest until we are free and free indeed.”