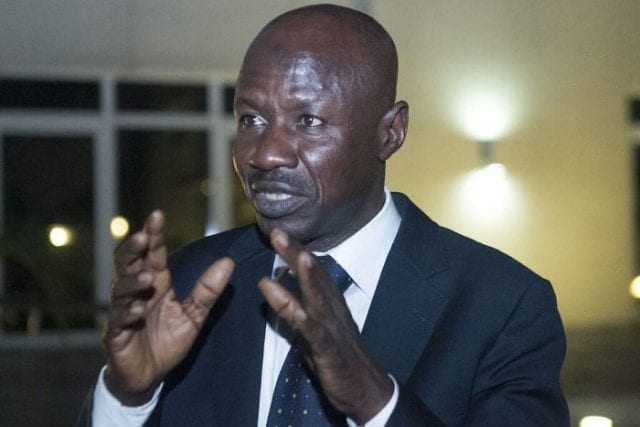 The Economic and Financial Crimes Commission (EFCC) has again instructed the public to guide against the activities of fraudsters using the name of its Acting Chairman to dupe public office holders.

“For the umpteenth time, the EFCC is constrained to alert the public on the activities of fraudsters who have been extorting prominent office holders using the name of its Acting Chairman, Mr Ibrahim Magu.”

“Their targets include sitting governors, ministers, and national chairmen of leading political parties.”

“Members of these criminal gangs, from available information, have been writing invitation letters to some politically exposed persons on the pretext that such communication emanated from the office of the acting chairman of the EFCC.”

“The commission has had cause to issue public disclaimer of such fraudulent letters, still the criminals are undeterred,” Wilson Uwujaren, spokesman of the commission said.

“The EFCC wishes to dissociate itself from the activities of these criminal gangs.

“It is important to state that Magu has not written or mandated any one to write any invitation letter to any state governor.

“He has no reason to do so as they belong to the category of officials that enjoy constitutional immunity from criminal prosecution while in office,” he said.

“Under no circumstance should members of the public offer gratification to anyone that claims to be an officer of the EFCC.

“Indeed such demand for gratification is enough indication that an impostor was up to mischief and should immediately be reported to the nearest office of the commission or police station.

“Magu has not mandated any one to approach anybody to collect bribes on his behalf.

“Any one claiming to represent his interest in any such unwholesome transaction should be apprehended,” he said.