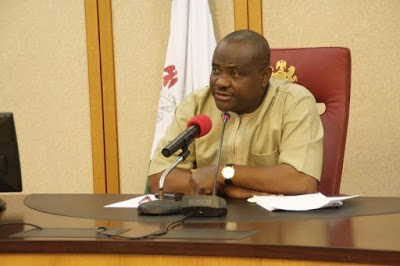 Governor of Rivers State, Chief Nyesom Wike has dismissed claims that his government is after the immediate past governor of the state, Mr. Rotimi Amaechi, because it doesn’t want him to get a ministerial appointment from President Muhammadu Buhari.

Wike explained that rather than worry about the possible appointment of Amaechi into President Buhari’s cabinet, he was interested in knowing how the state’s funds were managed under the former governor’s eight year reign.

Amaechi had while speaking at a dinner organized in his honour recently in Abuja, claimed that the Rivers State Government was sparing no effort in portraying him as a corrupt individual so that President Buhari, who is known to have zero-tolerance for corruption, will not consider him for appointment.

He also said the PDP-led government in the state is jittery because if he is appointed in a higher capacity under the present administration, the political equation in Rivers State will change.

But Wike rubbished the claims, stressing that a situation where nothing was left in the state’s treasury on his assumption of office as governor was annoying, worrisome and unacceptable.

Speaking through his Special Adviser on Media and Publicity, Opunabo Inko-Taria, the governor told journalists in Port Harcourt that it was illogical for anybody to claim that his complaint about corruption in the immediate past administration had any link with Amaechi’s likelihood of getting a federal appointment.

“So, what is he (Ameachi) going to do to him (Wike) as a minister or Federal Government appointee? Wike has not told anybody that he does not want President Buhari to appoint Amaechi as a minister. He has never said it; these are just insinuations and innuendos.

“If Mr. President, known for his mantra of zero tolerance for corruption; is saying that he is not going to appoint anybody with a stained image as a member of his cabinet and Rivers people are saying that Rotimi Amaechi is not qualified for an appointment, there is no problem with that.

“The governor is more interested in how the funds of Rivers State were spent; whether they were judiciously spent or they were just frittered away. That is the interest because it is annoying that when we took over, we met an empty treasury”, Wike said.

The governor expressed worry that those responsible for emptying the state’s treasury were the same people accusing him of taking N30bn loan within a month.

Yahaya Bello Will Be Sent Out Of Office Soon – Faleke

Anyone Caught Shooting Nollywood Movies Before April 17 Will Be Kicked...