Jonathan Has Deceived Us Enough – Fashola 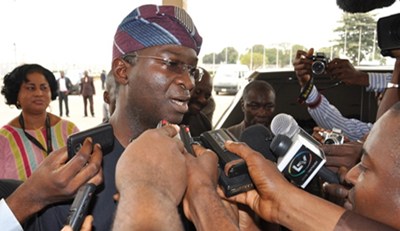 With the political campaigns across the country reaching fever pitch ahead of next month’s general elections, Lagos State Governor, Mr. Babatunde Fashola (SAN), Thursday, debunked the insinuation in some quarters that he holds a grudge against President Goodluck Jonathan.

Addressing a mammoth crowd of All Progressives Congress (APC) party faithful at a campaign rally held in Ajeromi-Ifelodun local government area of the state, Fashola said, “I have no personal disagreement with Jonathan”.

The governor pointed out that the only area of disagreement he has with the president is in his failure to fulfil lots of promises he (Jonathan) made to the residents of Lagos prior to the 2011 elections.

According to him, “I have no personal disagreement with Jonathan. But I am a citizen of this great nation. And if any political office seeker comes to make promises in public and the people voted for him, based on the promises he made, both the office seeker and the citizens have signed a social contract which must be fulfilled by both parties. The people of Lagos have done their part but the president has not”.

According to him, rather than fulfill his promises, President Jonathan started to “divide us along the ethnic lines. Is the president God? If God chose to make us different, no one can question that. We have lived together for hundreds of years.

“We need leaders that will bring us closer and not the one that will divide us. We have been our brothers’ keeper in Nigeria especially Lagos. For instance when our athletes go ahead to represent this country in any tournament, no one is concerned about the state the person hails from or his religion”.

Gov. Fashola berated the People’s Democratic Party (PDP) gubernatorial candidate, Jimi Agbaje for a statement credited to him that the South-South will collapse the nation’s economy if Jonathan loses the February 14 presidential election.

He said, “Nigeria will not divide if President Goodluck Jonathan losses the February 14 election. Rather, it is the President who will leave office and return to his home town in Bayelsa State. He has deceived us enough”.

Fashola also queried the transfer of the Commandant of the Rapid Response Squad, RRS, a special police formation financed by the State Government, Mr Hakeem Odumosu.

He argued that, “It was because the message of change has already reached their (PDP-led Federal Government) door step.

“The RRS is the unit that responded to the violent crime in the state. And last week, they transferred the commandant of the RRS out of Lagos. Whoever they bring will have his relations in Lagos”.

Can Jose Mourinho Turn It Around?