Firefighters battled a blaze at South Africa’s national Parliament complex on Sunday that sent a dark plume of smoke and flames into the air above the center of Cape Town. 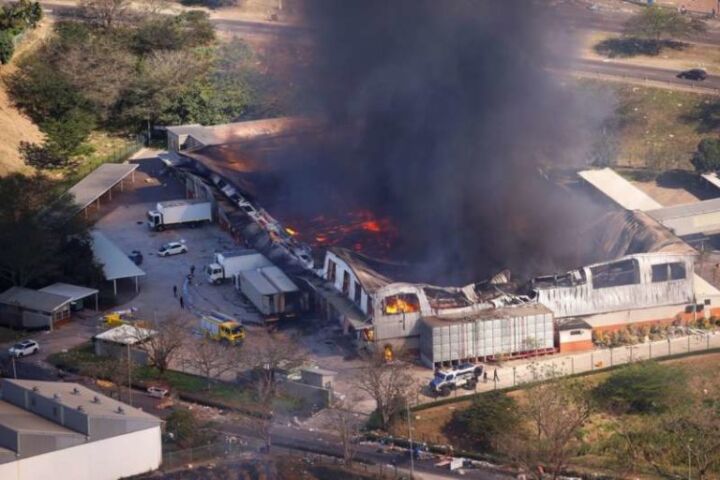 The fire started on the third floor of a building that houses offices and spread to the National Assembly building, where South Africa‘s Parliament sits, Minister of Public Works and Infrastructure Patricia de Lille said.

The fire is currently in the National Assembly chambers, De Lille said. This is a very sad day for democracy for Parliament is the home of our democracy.

City of Cape Town Fire and Rescue Service spokesman Jermaine Carelse said no injuries have been reported. Security guards first reported the fire at around 6 a.m., he said, and 35 firefighters were on the scene.

South African President Cyril Ramaphosa was briefed on the fire, De Lille said. The president and many of South Africa’s high-ranking politicians were in Cape Town for the funeral service of Archbishop Desmond Tutu, which took place on Saturday at the city’s St. George’s Cathedral, about a block away from the Parliament precinct.

Authorities feared that parts of buildings, some of them first built in the late 1800s, might collapse because of the heat.

The bitumen on the roof is even melting, an indication of the intense heat. There have been reports of some walls showing cracks, which could indicate a collapse, News24 website quoted Carelse as saying.

Police cordoned off the complex and closed roads. Some of the blocked-off areas were near where people had left flowers and other tributes to Tutu.

South Africa set to get $8.5 billion from U.S., EU and UK to speed up shift from coal

Women in IT starts with advice to ‘Own Your Space’

West Will Stand Up To Dictatorship – Britain warns Putin, Xi

For Real! Apple Launching an 8GB Version of the iPhone 5c

I Lied To Valbuena – Benzema