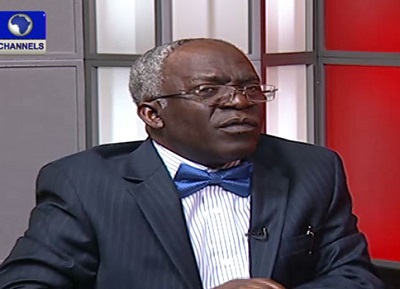 Falana in a statement said the President should suspend Baru indefinitely while the EFCC carries out its investigation.

He described the allegations as a “reckless contravention of the provisions of the Public Procurement Act.”

The senior lawyer also advised Buhari to step down as the Minister of Petroleum Resources due to his “busy schedule” as President, urging him to appoint another competent Nigerian to take the position.

According to him, the $25 billion contracts should be revoked once the EFCC investigation confirms that they were awarded without the approval of the NNPC Board.

“However, apart from sanctioning the officers responsible for creating the wide gulf between Dr. Kachikwu and the President, the allegation of the unilateral award of contracts worth $25bn by Dr. Baru ought to be investigated in line with the anti-corruption policy of the Buhari administration,” the statement said.

“In order to conduct a thorough investigation into the grave allegations of the reckless contravention of the provisions of the Public Procurement Act, Mr. Baru should be placed on indefinite suspension while the Presidency should refer the case to the EFCC.

“And once it is confirmed that the said $25bn contracts were awarded without the approval of the NNPC board they should be revoked while the recent appointment of the heads of the parastatals in the oil and gas industry should be reviewed in line with the constitution and the Federal Character Commission Act.”