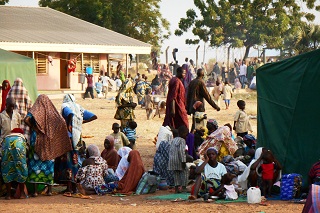 The National Emergency Management Agency (NEMA) and the United Nations have pledged to support the reintegration of the women and children rescued from Boko Haram in Nigeria.

This is contained in a statement signed by Mr Sani Datti, Senior Information Officer, NEMA, on Sunday in Abuja.

It stated that Mr Muhammad Sani-Sidi, Director-General NEMA, and Mr Daouda Toure, UN Resident Coordinator, made the pledge at the weekend when they interacted with Internally Displaced Persons at Malkohi Camp in Yola, Adamawa.

“NEMA, in collaboration with UN agencies, has mobilised a team of experts in psycho-trauma counseling, and medical doctors to provide all the necessary medical care to the rescued.

“Most of the rescued children are severely malnourished and have eye infections.

“There are about 63 unaccompanied children and six pregnant women only among the rescued persons”, the statement quoted Sani-Sidi as saying.

It stated that NEMA had engaged tailors to sew at least five sets of clothes for each of the rescued persons who arrived the camp with only the clothes they wore.

The statement added that the UN has also directed relevant agencies under it to provide needed assistance and support to the inmates.

It quoted Toure as saying that “UN agencies would support the Nigerian government in providing the needs of the rescued women and children and also facilitate their reintegration with their families.

“The world and their families have missed them and we would do all we can to ensure they return to their normal lives”.

It stated further that infant feeding, children’s clothes, diapers, and sanitation items have been provided to 21 nursing mothers at the camp.

It recalled that the Nigerian Army handed over the women and children to NEMA for rehabilitation after their rescue from the Sambisa forest in Borno. (NAN)