Chief Eyitayo Jegede, the candidate of Peoples Democratic Party (PDP) has stated that he would love to be in Governor Rotimi Akeredolu’s shoes.

Chief Jegede stated this on Wednesday, during a governorship debate organised by Channels TV.

He was countering statements issued by Governor Akeredolu that he (Jegede) was part of the administration that owed pensioners, civil servants and generally performed below expectations.

“The government he (Jegede) served in owed arrears of pensions; we paid.

“Morale was low in the civil service and the civil servants were dying, being owed seven months salaries; we paid,” Akeredolu said.

Replying to that, Chief Jegede stated: “I do understand Mr. Governor’s emotions. I would prefer to be in his shoes. I would love to be a governor so the people can compare what I will do in three and a half years to what he has done.

“This is because I do not know the basis of comparison between a commissioner (himself) and a governor (Akeredolu).

“I would love Mr. Governor to point out specifically what he has done.” 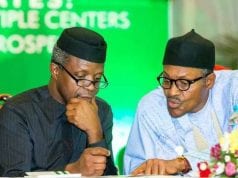 Buhari’s Government Is A One Chance Bus – Fayose

Nigerians Must Remember Where We Were In 2015 And Where We...

PDP, Only Viable Party In Nigeria That Can Guarantee Sustenance Of...