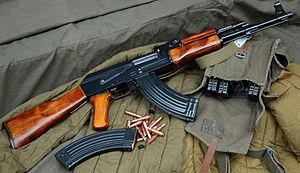 Two Fulani herdsmen identified as Usman and Idih have been arrested with two AK 47 rifle magazines containing 30 rounds of live ammunition each, by a police patrol team at Aboh Division in Delta State.

According to the Delta State Police Public Relation Officer, Deputy Superintendent of Police, Celestina Kalu, who disclosed the arrest on Tuesday, the suspects were on a motorcycle with registration number, NSK 136 QB, when policemen apprehended them at Setraco Junction, Ashaka/Aboh road.

The suspects are currently being interrogated by the police.

In its bid to reduce crime rate in the state, another police patrol team attached to the “A” Division, Warri, also recovered some weapons from a group of suspected cultists, who took to their heels when they sighted the police. They, however, abandoned a black bag, where the policemen found one locally made pistol, two daggers, mask-cap and one torchlight.

The Police spokesperson said investigation had commenced on the matter, “while efforts are on to apprehending the fleeing suspects”.

Delta State Commissioner of Police, Alkali Usman, had upon his appointment as the state’s CP last year declared war on crime.

He told Area Commanders and Division Police Officers (DPOs) in a meeting last October that it was time for “fire for fire”, adding that there will be no hiding place for criminals in the state.

“I will not take it easy with any office or policeman found to be lagging in the battle ahead. Those of you heading areas where ugly incidents have so far been recorded should wake up. I will not hesitate to deal with anyone found wanting in his duties. I urge you all to be more pro-active,” he had said.

&#39You are not alone,&#39 Ban tells people of Central African Republic...

Consensus Is Provided For By APC’s Constitution – Yekini Nabena