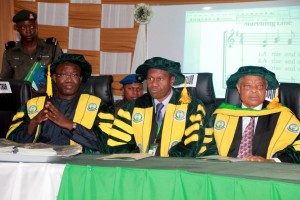 According to the Political Science professors, ethnicity and religion are still the trademarks of politicians in Nigeria adding that hate speeches featured prominently during the 2015 general elections and were relayed by social media.

In a communiqué issued after an international conference held at the department of Political Science and International Studies, Faculty of Social Science, ABU, Zaria and obtained by Pulse on Tuesday, April 11 2016, the professors advised politicians to shun hate speech.

The communiqué jointly signed by the Chairman Communiqué Committee of the Conference, Prof. Hudu Abdullahi, and the Chairman, Local Organizing Committee, Prof. R. Ayo Dunmoye, also stated that the plethora of political parties in a multi-ethnic society like Nigeria is a menace to a viable democratic culture.

Having acknowledged that internal democracy is rarely respected by Nigerian political parties, the Professors said Ethnicity and Religion are still the trademarks of politicians.

“The Conference noted that there was no equitable access to public media during campaigns by all political parties. The ruling party monopolized access to public television and radio,” the communiqué said.

The group said political parties are private organizations and their electoral campaigns during elections should be funded with private funds.

“But is in the habit of the ruling parties to use public funds and facilities in their campaign activities. The 2015 elections and previous elections have shown massive use of public funds for the purpose of campaigns,” the group said.

“Funding elections, as currently organized, is too expensive for a developing country like Nigeria. We should initiate a review of our electoral system in order to minimize the cost. Youth restiveness and thuggery during elections are caused by financial inducements from politicians and by unemployment. The conference observed that the continued marginalization of women in politics is not healthy for democracy.”

The group said INEC should be unbundled to allow other agencies to take part in the responsibilities given to them such as: voter’s education and payment of security agencies.”

The communiqué also advised that a constitutional court should be set up to take care of constitutional issue adding that the immunity clause in the constitution should be amended to give the president and governors immunity only from civil litigations.

“There is the need to initiate a major reform of the judicial process to reduce unnecessary delays and technicalities. Gender inequality in the selection of candidate by Political Parties should be addressed. There is the need to revisit the Report of Uwais Committee on Electoral Reform particularly on credible electoral system such as proportional representation. The opinions expressed by independent observers on elections should always be considered diligently and acted upon.”

Is Smalling The Best Centre-Back In The World Right Now?

We Were Misled On Missing School Girls, DHQ Admits

No Going Back On 2023 Igbo Presidency — Southeast Leaders