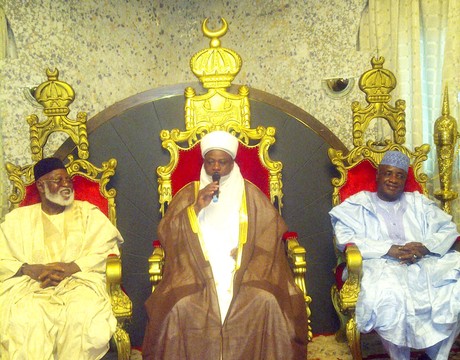 The Sultan of Sokoto, Alhaji Sa’ad Abubakar III, on Tuesday declared that Islam abhors the killing of any innocent souls.

“The Sokoto Sultanate Council, all traditional rulers and the generality of the Muslims, have dissociated themselves from such dastardly acts.

“Islam abhors the killing of any innocent souls without following the due legal processes,’’ Abubakar said.

The News Agency of Nigeria (NAN) reports that Abubakar spoke when the former head of state, Gen. Abdulsalam Abubakar (rtd), paid him a courtesy call.

“We are always committed to the growth and development of Islamic religion, but in line with its teachings and law.

“Muslims should even persuade non-Muslims to join the religion by their good conduct and strict adherence to the Islamic law.

“We should, therefore, live peacefully with our Christian brothers and not attempt to kill them,’’ the Sultan said.

The Sultan commended Abubakar for his dexterity and commitment to peace and unity in Nigeria, and globally.

Earlier, Abubakar extolled the sterling virtues of the Sultan, describing him as a pillar of peace, unity and peaceful coexistence.

“The Sultan has been facilitating peace, unity and understanding between Muslims and Christians in Nigeria and beyond,’’ the former head of state said.

He stressed the need for the use of dialogue to resolve all the problems of Nigeria, adding that this could be done in spite of the diverse religious, cultural and ethnic differences.

Abubakar, who told the Sultan that he was in Sokoto to inaugurate the state university, commended Governor Aliyu Wamakko for transforming the state. (NAN)

PDP Is Here To Play By The Rules – Uche Secondus