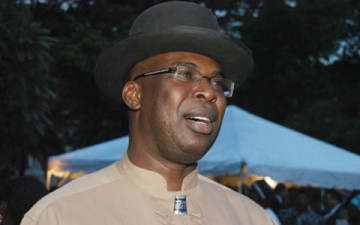 A former Governor of Bayelsa State, Chief Timipreye Sylva, has denied allegations linking him to Friday’s killing of four soldiers and a policeman on the Nembe waterways by suspected sea pirates.
The Defence Headquarters had on Saturday confirmed that the Joint Task Force (JTF) base at Nembe came under attack on Friday night and vowed to apprehend those behind the dastardly act.
A group, Ijaw Young Professionals in Bayelsa State, through its leader, Seighfa Tonye-Brown, however, claimed that Sylva as well as his party, All Progressives Congress, were behind the attack.
Mr. Brown alleged that the attack “was among the plans being hatched by the opposition party to unleash, between now and the (December 5 governorship) election, tension and insecurity in the state in order to force the hand of President Muhammadu Buhari to declare a state of emergency and possibly take over the state”.
“To former governor, Timipre Sylva, violence is a normal way of life”, he said. “The resort to violence as the only means of winning elections in this state is no longer fashionable”.
But the ex-governor, in a statement through his media adviser, Doifie Buokoribo, said the accusations by the “the non-existent Tonye-Brown and his faceless group” was “wild, unsubstantiated and irresponsible”.
“Sylva wishes to state categorically that he knows nothing whatsoever about the Nembe killings”, read the statement. “Similarly, neither Sylva nor the APC that he leads in the state is privy to any plan to employ violence as a strategy to win the forthcoming gubernatorial election in the state”.
Mr. Sylva also accused the Bayelsa State Government led by Seriake Dickson of failing to ensure security in the state.
“Sylva notes further that the escalation of violence in the state should be put squarely at the doorstep of the incumbent government of Mr. Henry Seriake Dickson”, he said.
The statement continued, noting “That government has failed woefully in securing lives and property, but instead has overtly and covertly procured and traded in violence to intimidate political opponents and any voice of reason”.
“That same government has embarked on all manners of subterfuge including, facilitating of arms to non-state actors essentially to prevent the change that is imminent in Bayelsa State.
“It is no doubt that Sylva as the symbol of that change is the target of this schizoid propaganda by faceless groups, paid and unpaid writers, and political jobbers.
“Sylva is unperturbed. Sylva abhors violence. He has never promoted violence under any guise. He only represents the voice of millions of Bayelsa people seeking change in the affairs of the state, a change to the gross ineptitude, pathetic profligacy and grand larceny of Mr. Henry Seriake Dickson”.
Sylva further called on the Inspector General of Police, Solomon Arase, to order an immediate investigation of the Nembe killings, and most particularly those behind the “Ijaw Young Professionals in Bayelsa State”.

Rashford Is A Special Talent – Smalling