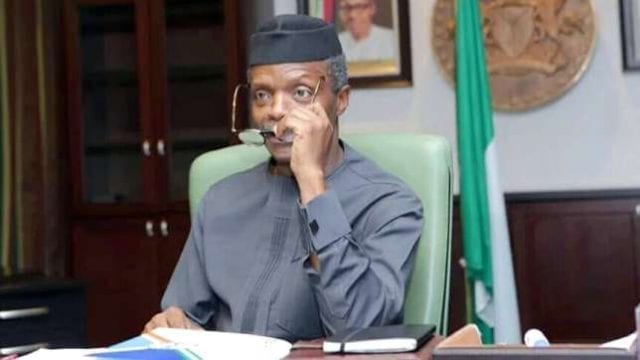 Acting President Yemi Osinbajo has said it will be suicidal to threaten the leadership of NASS that comprises of Senate President, Bukola Saraki and House Rep speaker, Yakubu Dogara.

Osinbajo made this known at the opening ceremony of the 16th Commonwealth Speakers and Presiding officers conference, which held on Tuesday, July 25, 2017 at the ECOWAS parliament complex, Abuja.

He said: “I don’t know the experience, of presiding officers from other nations present, of the portrayals by the press of the relationship between the executive and the legislature.

“Here in Nigeria what makes the news is the conflict between the executive and the legislature. The more dramatic the alleged conflict the more newsworthy.

“There’s something about rumours of us wrangling and quarrelling that always seems to catch and hold the attention of our friends in the traditional and social media.

“If you closely follow the news here for example, you will regularly be confronted – especially in recent weeks – by ‘Exclusive’ and ‘Breaking News’ reporting of several different stories of conflict between the executive and the legislature.

“A particularly intriguing report said “Acting President threatens National Assembly leadership! Now anyone who sees the combined size of the distinguished Senate President and the Rt. Hon. Speaker compared to mine must know that it would be a suicide mission to threaten either of these two gentlemen let alone both of them.”

Continuing, Osinbajo said: “I congratulate my brother, Rt. Hon. Speaker of the House of Representatives of the Federal Republic of Nigeria, Yakubu Dogara for successfully steering the affairs of this elite association since November 2015 when the 15th Conference in Accra, Ghana approved the National Assembly of Nigeria as the next host.”

Leave Buhari Out Of The DSS Raid – APC