Home West African News Nigeria News We Were Assured By The Doctors That Dino Melaye Is In Good...
Facebook
Twitter
WhatsApp
Email
Telegram 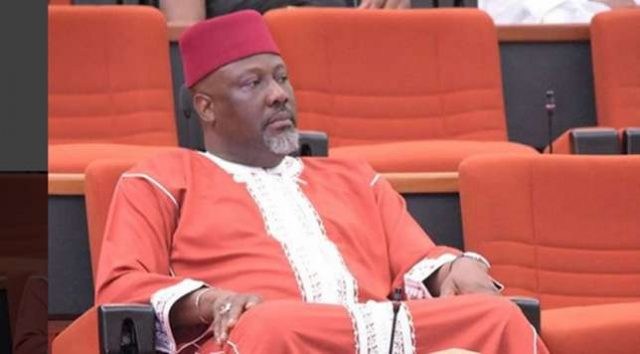 Senator Dino Melaye has not eaten any food or taken water since he was hospitalized, Sen Bala Na’Allah has said.
Na’Allah disclosed this after his visit to the National Hospital where Melaye was receiving treatment on Wednesday, April 25, 2018.

Na’Allah and his colleague who visited the hospital were denied access to Melaye.

“We went to the National Hospital this morning where Senator Dino was alleged to have been kept from yesterday and we confirmed that he was brought yesterday at about 11pm,” he began.

“We spoke to the doctor who is in charge of the ICU and they assured us that they are doing everything humanly possible to stabilize him but he is in the intensive care unit. We tried as much as possible to see him but we were refused access. The instruction that was left by the Police is that only Senator Abu Ibrahim is permitted to see him.

“As at the time we were leaving the hospital, the feeding of Dino has become an issue because the Police are not willing to feed him because of the situation. They are afraid. The hospital has equally expressed reservations about feeding Senator Dino.

“A medical personnel from the Police who is working together with the trauma surgeon handling Dino told us that whoever is bringing the food for Dino must taste it. There is also a report that Dino has asthma so a chest surgeon was the one seen while we were leaving.

“Lastly, there was insistence to remove him from the National hospital but the management told them that an undertaken must be signed that whatever happens will be on them. That is what is keeping Dino at the National Hospital till date because nobody is willing to sign,” he added.

Nigeria Is On The Right Track With Buhari – Usman Danmadamin-Isa

Pogba Will Be Back Next Week, Martial Might Miss Spurs Clash...

It Bleeds My Heart When People Kill In Politics – GEJ