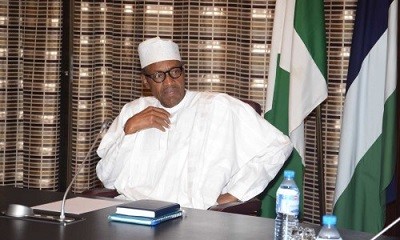 President Muhammadu Buhari Thursday said his administration would shun all anti-development policies in order to create a more conducive atmosphere for entrepreneurs, while also lamenting that Nigeria was at its lowest ebb as far as industrial development was concerned.

According to a statement by his Special Adviser on Media and Publicity, Mr. Femi Adesina, President Buhari made this known at a meeting he had with the Permanent Secretary of the Federal Ministry of Industry, Trade and Investment, Abdulkadir Musa, and senior officials of agencies under the ministry.

Buhari was quoted as saying that employment generation was one of his key campaign promises and that he would keep to the promise.

The President was quoted as saying, “With high interest rates and entrepreneurs needing trillions of naira to buy machinery, we are virtually back at ground zero as far as industrial development is concerned.

“So, we will shun all anti-development policies and make the climate more suitable for entrepreneurs. We will create the environment for them to thrive. Generating employment was one of our key campaign promises and we will keep that promise.

“We will no longer allow our markets to be flooded with things that we can produce ourselves. We must believe in our system. Whenever you need my intervention, please come to me”.

The statement also quoted Buhari as saying his administration would implement essential reforms to protect indigenous manufacturers from unfair competition from abroad.

The president said with its focus on job creation, his government was ready to do whatever it considered necessary to boost domestic manufacturing and industrialisation.

He also said that his administration would fully support the effective implementation of the plan evolved by the ministry to boost local manufacturing through legal, regulatory and structural reforms; lower interest rates, special intervention funds, protection of local manufacturers and significant improvements in national infrastructure.

The perm sec and his team reportedly told Mr. Buhari that the objective of the ministry’s Industrial Revolution Plan was to create more jobs, diversify exports and broaden the country’s tax base.

They said that the plan’s critical success factors included dialogue and consultation with industry stakeholders, essential reforms and greater collaboration among relevant agencies.

Bullying Made Me Think Less Of Myself – Denola Grey