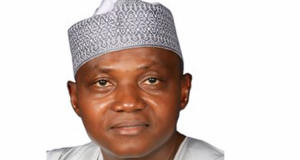 The Senior Special Assistant to the President on Media and Publicity, Garba Shehu has said that the media team will rely on third party information on Buhari’s health status.

Shehu said this on Tuesday, May 9, 2017, while speaking on Sunrise Daily – Channels Television programme.

The President’s spokesman also revealed that he will not be joining his boss in London.

According to Daily Post, Shehu said “No. I don’t think I will go. I hope the President has the privacy that he needs with his doctors and regains his health. We will continue to rely on third party from my own point of view.”

See also  Senate Not In Support Of Estimated Billing

Meanwhile, Nigerians have criticised Buhari for telling the Senate that Vice-President Yemi Osinbajo will coordinate the activities of government in his absence.

The President, in a letter to the Senate, said “In compliance with section 145 {1) of the 1999 constitution as amended, I wish to inform the distinguished Senate that I will be away for a scheduled medical follow-up with my doctors in London. The length of my stay will be determined by the doctor’s advice. While I am away the vice president will coordinate the activities of the government.”

In a swift reaction the lawmakers condemned the use of the word coordinator, and declared that the VP should act as the President till Buhari returns.

President Buhari travelled to London on Sunday, May 7, 2017, for an extensive medical check-up.

We have finalized the incorporation of NNPC Limited – CAC