Why We Detained Father Of Nyanya Bomb Blast Mastermind – SSS 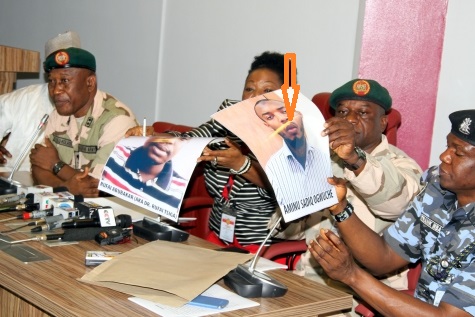 The Department of State Security Services has detained the father of the alleged co-mastermind of the April 14 bomb blast in Nyanya, Abuja, Aminu Sadiq Ogwuche.

Deputy Director, Public Relations of the service, Marylyn Ogar, made this known at the National Information Centre chaired by Director General of the National Orientation Agency, Mr. Mike Omeri, in Abuja on Thursday.

Ogar said the suspect’s father, Col. Agene Ogwuche (rtd), was being held for his failure to produce his son when requested in accordance with the bail term granted to Sadiq in 2011 when he was first arrested on suspicion of terrorism.

She said, “It might interest you to know also that the father who took on bail the first time is a Nigerian. Somebody asked the question what has happened to him. The day we could not get him to give us Ogwuche, he was taken in”.

Shedding more light on the detention of Ogwuche, the Force Public Relations Officer, Frank Mbah, a Chief Superintendent of Police, said the sins of the son would not be visited on the father, however, he must pay for his negligence.

“That explains why the DSS immediately took him in when he could not produce the son. And that is the farthest we can go. If he had signed a bond to forfeit a property or to forfeit a certain sum of money, he will be made to suffer the forfeitures but we cannot visit the sins of the father on the son”.

Speaking on the matter, Omeri explained that if at the end of the day the father was found to be culpable in the blast that rocked Nyanya, he would answer for it.

“For now, he has contravened the terms of the bail and he is answering for that one for now”, he said.

The NOA boss, who also spoke on other issues bothering on security, said the suspect has not been extradited to the country yet because of the paper work involved to get him back to the country to answer for his crimes.

He said, “The process of getting persons extradited from sister countries take some procedures and time. So his arrival in Nigeria is being delayed. The relevant agencies in Nigeria are working hard to ensure the processes are concluded so that he will come back to Nigeria. As soon as that is achieved, we will communicate to you appropriately.

“By yesterday, there was reported mutiny of soldiers in Borno State. We wish to say that the nature and the details of the incidence are still very sketchy. However, a military board of enquiry looking into the matter has been constituted. The outcome of the enquiry will be communicated to you as soon as it is completed.

“Related is the Kalabalge incident. We wish to confirm the incident that happened in Kalabalge town between the vigilante group and Boko Haram yesterday. While we await full details of the incident, information available to us is that residents of the town got wind of an impending attack on their community by the insurgents and therefore mobilised against the attackers. You will be briefed on the exact number of causalities when ascertained by military authorities who are already at the location.

“You will recall that we had appealed to Nigerians to mobilise and support this war against insurgents. We want to commend the community for what has happened and we call on more people and citizens to be more security conscious and aware that they also have responsibility to themselves and communities while pledging that Nigerian armed forces have stepped up their game and working with local support to make sure that we put this behind us”.

Answering a question posed by a foreign journalist on the speculation that Ogwuche has British passport, Omeri said though he was born in the United Kingdom, Nigeria was not going through his country of birth to execute the extradition since he has dual citizenship.

He said, “He was born in the UK. So if the law permits that he is a British national, then automatically he is but his father is a Nigerian. Nigeria and Sudan has extradition understanding. Our law permits dual citizenship”.