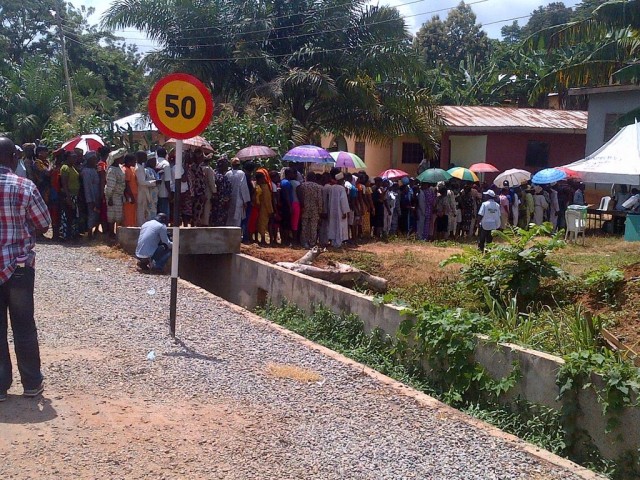 Ekiti voters turned out en mass on Saturday for accreditation as the state’s governorship election got under way amidst tight security.

The News Agency of Nigeria (NAN) correspondents monitoring the exercise across the state report that many voters had queued as early as 6.30 a.m. waiting to be accredited.

In Ado-Ekiti, the state capital, voters, including the elderly and people in crutches, were seen trooping to the various polling units carrying food flasks of various sizes.

NAN reports that at Unit 1 at St Michael Primary School in Ado-Ekiti, anxious voters were already in the queue as accreditation commenced at exactly 8 a.m.

At Unit 4, Unit 11 Owena, Ijigbo Roundabout Polling Unit and Unit 10 at Assumpta, all in the state capital, there was a large turnout of voters for the accreditation.

Market women were sighted trooping out to the Ojaoba Market where many of them were said to have registered.

At the Oke Agbe Farm Settlement 2 Polling Unit near the INEC office in the state capital, the exercise, which started at 8 a.m., witnessed a huge turnout of electorate for registration, with many of them checking their names on the pasted list of voters.

Across many council areas of the state, the accreditation exercise also witnessed a massive turnout of voters.

NAN reports that a 90-year-old farmer, Elijah Ogunlana, the first to be accredited, was one of the many elderly voters accredited.

The physically challenged also turned out for the exercise at the polling unit.

In Units 004 and Adeosun in Afao-Ekiti, many voters had been accredited while INEC officials were seen waiting for other voters.

At Eiyelori Polling Unit in Iyin Ekiti, the home town of Labour Party candidate, Mr Opeyemi Bamidele, there was also a huge turnout.

In Odole Polling Unit 1 and Ojoku Polling Unit 1, 50 and 100 voters respectively were in the queue waiting for accreditation as early as 6.30 a.m.

A massive turn-out was also registered at Agba Akin unit as well as Oluko 1 and 2 polling units, all in Iyin Ekiti.

NAN further reports that at Ifaki, the home town of former Gov. Olusegun Oni and Sen. Olubunmi Adetunbi of the APC, accreditation commenced peacefully on schedule.

At Oriolodo Ward 2 Unit 006 where Oni was accredited at about 9.30a.m. the former governor expressed satisfaction with the massive turnout.

Adetunbi, who was also accredited at his Koko Ward 1 Unit 003, confirmed that the exercise was peaceful.

In Oye-Ekiti, where Sen Ayo Arise hails from, there was an impressive turnout as voters queued up for the exercise.

Arise, who was accredited at Ward 1 Unit 4, Imogun Ilemio Quarters, commended INEC and security agents over the peaceful conduct of the exercise.

Also at the Olaofe Compound Polling Unit 003 in Are, Irepodun/ Ifelodun Local Government Area, more than 200 voters were in the queue as at 9.a.m.

Your Failures Personal, Not A Generation Problem – Tinubu Replies Jonathan

Don’t Be Too Busy To Communicate With Your Partner – Anita...

We’ll Do Everything Possible To Protect The Doctors In Kano Against...