The Nigerian Government and the Republic of Germany are set to partner on trade facilitation and micro, small and medium scale enterprises development as part of efforts to strengthen the existing economic ties between the two countries.

The Minister of Industry, Trade and Investment, Olusegun Aganga confirmed this after a meeting with the German Ambassador to Nigeria, Dorothee Janetzke-Wenzkel and the Country Director of German Cooperation (GIZ), Thomas Kirsch in Abuja recently.

Olusegun Aganga said that the Ministry would work with the German Government towards enhancing industrial skills development and improving access to finance for MSMEs across the country. This, he added is in line with the agenda for the National Enterprises Development Programme (NEDEP).

“The meeting with the German Ambassador which dwelt on a number of growth issues was a fruitful one. Nigeria has always had a strong economic and trade relationship with Germany. They have been very helpful and played active roles in critical sectors of the Nigerian economy such as the power sector where we have a large number of German companies,” he explained. 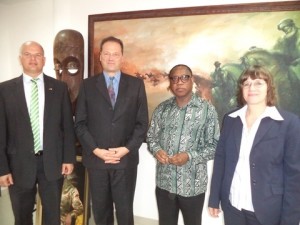 According to him, the meeting deliberated on trade facilitation in terms of how the two countries can engage partnership by removing the barriers that impede trade to make export of goods from Nigeria to other African countries cheaper and quicker. “What the German Government has done is to design an Information and Communications Technology system that will help improve the non-trade barriers which cause delay in the movement of goods and also the cost and time of doing business in Nigeria. So, we are collaborating on how we can improve trade facilitation within the region,” the Minister said.

He further pointed out that another key area they could work together is on skills development. Adding, Germany has one of the most robust internship programmes highly regarded and respected worldwide. The idea, he noted is to see how Germany can work with Nigeria’s Industrial Training Fund on skills development. He also revealed that the last area which the meeting deliberated was access to finance for micro, small and medium-scale enterprises to see how they can support the National Enterprise Development Programme. He expressed optimism that Nigeria will gain tremendously from the collaboration.

Also speaking after the meeting, the German Ambassador to Nigeria reiterated that Germany is ready to work with Nigeria to improve the ease of doing business and to boost skills acquisition among Nigerians.

“The basis of the meeting with the Minister of Industry, Trade and Investment was to find out how much Germany is doing in terms of partnering with Nigeria on trade issues. We discussed the Bi-National Commission which Nigeria has with Germany, focusing particularly on energy but also on economic issues as a whole,” she averred.

She continued that Germany is also partnering with Nigeria on the provision of vocational training, in order to boost industrial skills acquisition as well as bridge the skills gaps of Nigerians.

Dorothee Janetzke-Wenzkel stated that most times people don’t get the jobs because they lack the skills, even when the jobs are there. She indicated that Germany wants more Nigerians to be trained so that they can use their skills to work and have discussed specific projects which the German International Company for Co-operation in Nigeria is doing. “We have looked at some upcoming businesses which will border on the informal sector of the Nigerian economy,” she posited.