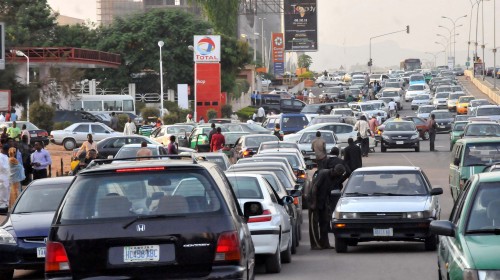 As the fuel scarcity continues to persist with no solution in sight, the Nigeria Labour Congress (NLC) has urged President Muhammadu Buhari’s administration to take urgent steps to put an end to what it called the “mass suffering” of Nigerians.

The NLC said no group of cartel, no matter how powerful, should be allowed to box government into a corner, to do its bidding.

In a press statement entitled: “Fuel Scarcity: Mr. President, Please Stop Mass Suffering of Nigerians”, the NLC President, Ayuba Wabba, said a situation where a few individuals hoarding petroleum products with a view to arm-twisting government to removing subsidy on petroleum products, would be rejected by Nigerians.

Wabba said the NLC would not allow any group to distract it from its struggle to have control over the operations of the sector, especially as it relates to full sufficiency in refining the petroleum products.

The statement reads: “The Nigeria Labour Congress is outraged by the continuing incidences of fuel scarcity, resulting in skyrocketing prices and long queues spreading to different parts of the country.

“We note that this is happening despite assurances from government and its agencies that there is enough fuel being distributed around the country and that citizens need not go into panic buying.

“That the situation has not visibly improved after more than 72 hours of such assurance means that the marketers and other groups that have held the country hostage over the years for their unearned profiteering from the petroleum sector are still determined to continue as if it is business as usual.

“It is completely unacceptable to us that Nigerians are forced to go through the perennial hardship, especially towards the end of the year, and now have to cough out between N130 – N300 per litre of petrol in different parts of the country, instead of the official N87 per litre price.

“This for us shows a clear determination of the unpatriotic operators in the petroleum sector working to circumvent government regulation through blackmail and other unorthodox methods”.

The NLC, therefore, called on government to urgently address the issue of hoarding by marketers and others, accusing them of canvassing for deregulation in which government would hands-off regulating prices of petroleum products.

See also  Jonathan Rules Out Investigation Of Leaked Auido On Ekiti Polls, Says It Was “Fabricated”

“Given that petroleum products continue to be the artery of our economy, indeed our existence, it is naïve and foolhardy to expect that government will hands-off the downstream sector and allow for those whose sole purpose is profit-making to take over full control of determining the prices of these critical products.

“They have done this and succeeded in the past, most particularly in the governments of former Presidents Olusegun Obasanjo and Goodluck Jonathan, through blackmail and deliberate hoarding of petroleum products”, the statement said.

The NLC further appealed to government, through the regulatory agencies like the Department of Petroleum Resources (DPR), to impose punitive sanctions on the perpetrators of the “artificial scarcity”.

Wabba added that the NLC was prepared to partner with the relevant regulatory and enforcement agencies to enforce the N87 per litre price regime just as he called on state governors to join in enforcing the official price of products in their domains.