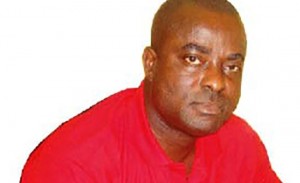 The Nigeria Union of Journalists (NUJ), Saturday called on the Nigeria Police to release the Associate Editor of the Sun Newspapers, Ebere Wabara, who was arrested at his residence in Lagos on March 28, allegedly on the orders of Gov. Theodore Orji of Abia.

“The arrest and detention of Ebere Wabara by the police on the orders of the Gov. Theodore Orji of Abia clearly shows that Nigeria is still in its undemocratic periods,” said Mr Shuaibu Leman, National Secretary of NUJ, in a statement released in Abuja.

“After about 15 years of uninterrupted democracy, we are yet to move away from the anti-democratic practices that characterized former military regimes.

“We are further worried that this arrest and detention runs contrary to common sense and the law.

“It is our contention that no responsible government should be seen to be arresting and detaining its citizens indiscriminately,” the statement said.

The statement continued; “It is unfortunate that the government of Abia had openly shown its bias in this case as everything conceivable is being done to frustrate the release of Wabara.

“We say no to government who make a mockery of the freedom of expression and democracy when they encourage a culture of impunity and lawlessness against the media,” it stated.

The statement cautioned leaders on engaging in such acts of impunity.

“Release Wabara unconditionally and the time to stop such acts of impunity is long overdue,” it said.

Entrepreneurship Is A Long And Hard Journey – BBNaija’s Cee-C