Last week, the ACLU filed a welcome additional challenge to the NSA’s warrantless Internet backbone surveillance (aka “Upstream” surveillance) on behalf of Wikimedia and a number of other media and human rights organizations. We applaud all of those involved in bringing the case.  It adds another avenue of attack on one of the NSA’s most audacious programs—tapping into the very backbone of the Internet and thereby putting all of our online activities under scrutiny.

Wikimedia, the non-profit that operates Wikipedia, succinctly explained in a blog post why the NSA’s “collect it all” mentality is dangerous: it forces Wikipedia users to “look over their shoulders before searching, pause before contributing to controversial articles, or refrain from sharing verifiable but unpopular information.”

The Upstream surveillance challenged by Wikimedia is also challenged in EFF’s longstanding lawsuit, Jewel v. NSA. (Laura Poitras’ Academy Award-winning documentary Citizenfour even features a hearing in the Jewel case back in 2011.) Jewel is a class action on behalf of ordinary Americans brought in San Francisco federal court, whereas the Wikimedia case was filed by non-profit organizations and is pending in Maryland federal court.

Both cases are now supported by the NSA’s public admissions that what it calls Upstream involves copying Internet traffic—including e-mails, chat, web browsing and other communications—as the data traverses the fiber optic backbone of the Internet. As our graphic below shows—adapted slightly from one we used in Jewel and based on admissions contained in previously secret court orders (pdf) and the Privacy and Civil Liberties Oversight Board report (pdf) and other sources—the NSA sits between Internet users, such as Wikipedia visitors and editors, and web servers like Wikipedia’s.  It intercepts their communications in order to copy and then analyze and filter them. (Links to the government admissions and other documents supporting this graphic are available here.) This includes reviewing both the content and the metadata of messages retained past an initial filter. 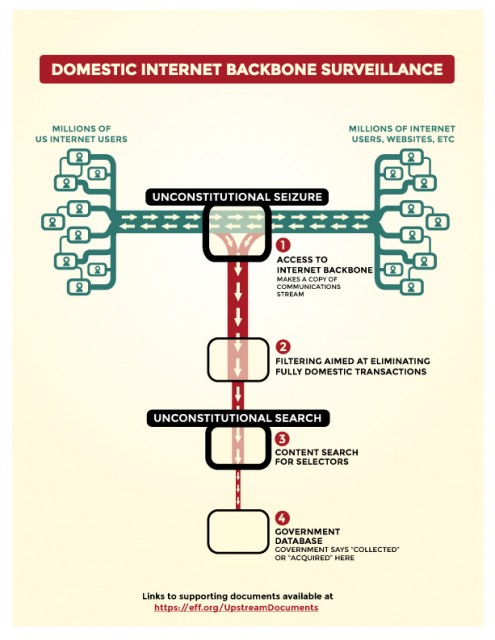 The NSA claims that Section 702 of the FISA Amendments Act (FAA) authorizes them to collect your communications involving “non-US persons,” but of course you have a right to have a private conversation with someone abroad and to access information stored on a website hosted abroad without the government involved at all. And even by the government’s own description, its Internet backbone collection routinely sweeps up and searches through the content of a tremendous number of purely domestic communications, where the requirement to get a warrant is unequivocal.

Like the Wikimedia plaintiffs, EFF has argued in Jewel that Internet backbone surveillance violates Internet users’ constitutional rights. Specifically, we argue that by copying traffic from the backbone, the NSA has improperly seized communications, and by then searching the copied material for “selectors” such as e-mail addresses, it has carried out an unreasonable search in violation of the Fourth Amendment.

Last month, however, the court issued a disappointing decision on the Upstream collection in Jewel. The court wrote that despite reams of public evidence, including the government’s own admissions, the plaintiffs had failed to paint a complete enough picture of the program to establish their standing. It also said that the additional information needed was just too secret to serve as a basis for a court decision about whether the constitution has been violated. As a result, the District Court found that a “full and fair adjudication” of our clients’ Fourth Amendment claims would require consideration of evidence covered by the state secrets privilege and would risk harm to national security.

We disagree with this ruling and will continue to pursue our claims. We believe it is dangerous in a democracy to allow claims of secrecy to prevent evaluation of whether the government has invaded the constitutional rights of millions of innocent Americans. Such secrecy is especially inappropriate when it is used to preclude consideration of a program that is already widely acknowledged by the government. Moreover, the law actually provides a mechanism for considering secret evidence concerning electronic surveillance without harm to national security, and this same court had previously ruled that this mechanism largely displaced the state secrets privilege.

Most importantly, however, we are loudly cheering on our colleagues at the ACLU, Wikimedia and others in their challenge to Upstream collection. We need to reaffirm that our constitutional rights aren’t subject to a national security exception and reinstate the bedrock American freedom of innocent people to engage in private conversation.

CBN issued directive that BVN violators would be sanctioned

IOM Condemns Attack on IDPs and Continuing Violence in Bangui

Buhari Threatens To Back Out Of Abuja Peace Accord