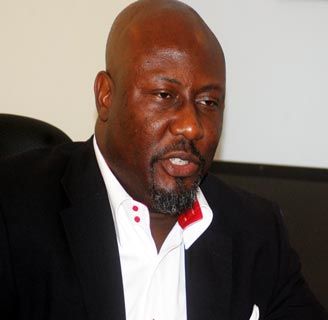 Adeyemi was the senator representing the senatorial district on the platform of Peoples Democratic Party, PDP, before he was defeated by Melaye in the March 28 polls.

The former senator had approached the Election Petition Tribunal in Lokoja, the Kogi State capital to upturn the election of Melaye as senator.

The Tribunal, while dismissing Smart’s petition, said his lawyers filed their defence too late.

Delivering judgment in the suit, Chairman of the three-member tribunal, Justice Akon Ikpeme, described the petition by the PDP candidate as “incurably defective”.

He is currently challenging the tribunal’s ruling at the Court of Appeal.

Speaking to journalists in Abuja yesterday, Melaye claimed that Tinubu had contacted the immediate-past Attorney-General of the Federation and Minister of Justice, Mr. Mohammed Bello Adoke (SAN), to take over the legal battle on behalf of his opponent.

He also said that Adeyemi, on the request of Tinubu, had forwarded details of the suit to Adoke, asking him to look for a judge in the Court of Appeal that would offer assistance.

But Tinubu, in his reaction, asked Melaye to look elsewhere for people to blackmail.

The APC leader, who spoke through his Media Adviser, Mr. Sunday Dare, said it was nothing but a “kitchen of malicious lies”.

Dare said, “This is another lie from their kitchen of malicious lies. They are all over the social and traditional media, spewing lies and planting stories. We are not about that. Nigerians are not as gullible as they think.

“He is aligned with people who want to kill the party, and we wish him luck, but they will not succeed because the party belongs to the Nigerian people.

“This blackmail, like other ones, will not work. It cannot stick. Adoke? Who is he? Tinubu cannot recall when last he saw him or even spoke with him. Dino should look elsewhere for people to blackmail”.

Melaye stood his ground on the allegation, claiming he incurred Tinubu’s wrath for leading the campaign that led to the emergence of Bukola Saraki as Senate President during the recently concluded election of presiding officers of the 8th Senate.

He said, “I have no regret supporting Senator Saraki and my electoral victory was ordained by God and not by man. Therefore, no mortal can reverse it. In God I trust, no matter how desperate they might be.

“I am privy to an electronic mail sent to Adoke by an Abuja-based senior editor who is close to Tinubu in which he forwarded the court papers filed by Smart Adeyemi at the tribunal to Adoke.

“In the said e-mail, Adoke was told to look for a trusted justice in the Court of Appeal who would be useful for Smart Adeyemi”.

How to Make Your Website's Design Shine