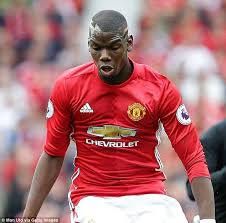 Manchester United boss Jose Mourinho insists Paul Pogba has not been distracted by FIFA’s investigation into his £89.3 million move from Juventus ahead of Thursday’s crucial Europa League clash against Celta Vigo.

World football’s governing body announced on Tuesday that it is looking at the deal through its Transfer Matching System (TMS), the online platform that monitors cross-border transfers.

That news has interrupted the build-up to United’s Europa League semifinal second leg at Old Trafford.

Asked if the stories had affected him or Pogba, the United manager told a news conference: “No. The question is simple. He asks the facts and, no, he isn’t affected.”

It has been reported that the probe is linked to claims that agent Mino Raiola will earn £41m from the world-record deal that last summer saw the France international return to Old Trafford last summer.

However, Raiola told The Times on Wednesday: “I have nothing to say. My lawyers will take care of it.”

Mourinho has insisted that if United do not qualify for next season’s Champions League it is because they do not belong in the competition.

United can book a place in Europe’s top club competition if they win the Europa League this season. There is still an outside chance they could also finish in the Premier League’s top four.

Mourinho has bemoaned a lengthy injury list during the final weeks of the season.

But ahead of the Europa League semifinal second leg against Celta Vigo, the United manager says they will have to face up to a harsh reality if they cannot book a return to the Champions League.

“If we don’t qualify for the Champions League, it is because we are not good enough,” he told a news conference on Wednesday.

“If we win, then it means we are strong enough to go to the final. The Champions League is the competition we want to be in. I want to focus on where we are. Nobody has more motivation than I have to try to win.”

Mourinho threw in the towel in the race for the top four following the 2-0 defeat to Arsenal on Sunday. It left United four points adrift of fourth place with three games to go.

They have repeatedly missed chances to break into the Champions League places this season, drawing 14 games in the league.

Mourinho hinted he has struggled to motivate his players to fight for the runners-up positions in the Premier League. But he insists that should not be a problem in the Europa League.

He added: “It’s different to play for top four than to play to win a European competition. The difference between fourth and fifth and sixth, it’s fighting for Champions League, but no trophy, no honour, no prestige.

“Fighting for a title and on top of it the bonus of playing in the Champions League. But at the moment, we think about the title, the chance to play in the European Super Cup against a top team, and all these things, give no space to complacency.”

AKA And Bonang Matheba Playing With The Media?