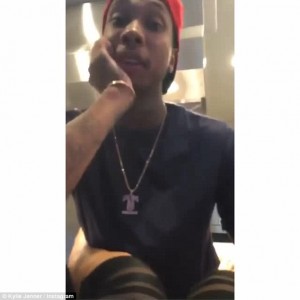 US rapper Tyga has landed himself in controversy this New Year as a 14 year old girl has come out to say that the former Young Money rapper persistently texted her on social media.

Molly O’Malia, a model, who is represented by Gloria Allred said Tyga initiated contact with her first on Instagram contrary to earlier reports in December.

She spoke about her interaction with Tyga at a press conference on Monday.

“I’m very upset that a story about Tyga, Kylie Jenner and me was published in OK! Magazine and I want people to know the truth. The truth is that Tyga contacted me first. He direct-messaged me on Instagram. I knew who he was, but I was surprised that he was contacting me. I thought that it could possibly be about my music but he did not mention that in his initial communication. I thought that was strange but I was thinking he would bring it up in his next message to me. However, he didn’t mention in the next message” said the 14-year-old girl in the video.

She said after a while she got uncomfortable talking to Tyga.

The 14-year-old girls also stated that she did not reveal any information about her and Tyga to OK! Magazine.

“I never sent the communication between Tyga and me to OK! Magazine and I don’t know how they obtained them. I would never have allowed OK! Magazine or any other magazine to use them.

“It is also upsetting to me that OK! Magazine never even contacted my mom or me to check the facts to see if what they’re publishing was true. I’m speaking out today because I don’t want what happened to me to happen to any other young girl” she said.

Tyga has responded to the girl’s claim.

4 Factors that Show the Growth of the African Economy