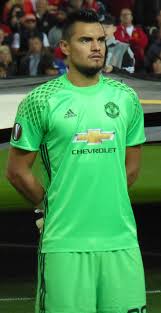 SERGIO ROMERO is set to step up to be Manchester United’s number one next season – should David De Gea move to Real Madrid.

The Argentine international has impressed manager Jose Mourinho this season as a more than able deputy to De Gea – so much so that he is set to earn a new contract in the coming weeks.

Now with De Gea maybe edging towards a move to Real Madrid the boss has confidence that Romero can fill his gloves.

Romero, 30, has next season plus the option for a further year on his current contract.

But that will be turned into a new three-year deal if he becomes the official number one.

De Gea is the subject of a potential £60million move to The Bernabeu although Mourinho will battle to keep him.

Romero said: “I played one year with Gabbiadini in Sampdoria in Italy and a lot of training.