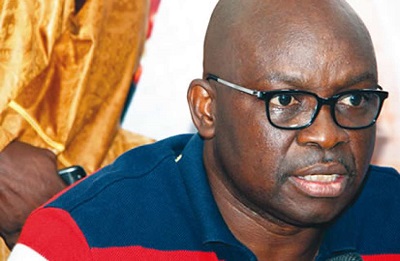 Governor of Ekiti State, Mr. Ayodele Fayose, has said plea for forgiveness should not be mistaken as an act of cowardice by his opponents, saying his tenure in office would be determined only by God.

He said he took the step to seek a genuine reconciliation with the aggrieved 19 All Progressives Congress lawmakers in the state House of Assembly, who were plotting his impeachment.

The governor spoke on Sunday at the thanksgiving service organised for him at the Cathedral Church of Emmanuel, Anglican Communion, Ado Ekiti, to celebrate the Supreme Court judgment, which affirmed his victory as the duly elected governor of Ekiti State.

Fayose said, “I asked for forgiveness for reconciliation and to pursue genuine peace. Waving the olive branch does not mean cowardice, it is for peace.

“Conspiracy is against God’s will. What better way could one seek peace other than asking for forgiveness”.

The governor advised the APC to emulate President Goodluck Jonathan, who conceded defeat and saved Nigeria from disintegrating.

“When I contested for Senate they said I lost and I did not fight anyone. I did not go to the tribunal and I was saying good things about the government then. The opposition should be courageous enough to accept defeat. I follow Jonathan in and out of office. Jonathan gave up for survival of Nigeria. Jonathan prevented the prophecy that Nigeria would break up in 2015.

“I’m enjoying the mandate of God through his people and that cannot be controverted. My sin is because I allowed the common man to breathe the air of hope.

“The people have spoken (governorship election), they said it was military intervention. They spoke the second term (presidential election), is that one photochromic? And they spoke again the third time (House of Assembly election).

“In a democracy, you need a simple majority to win elections, but I enjoy total majority. They want to take government by force, firing shots at people; that is coup against the people. They said they are coming again tomorrow, we are waiting for them”.

I Had To Overcome The Death Of My Friends – Davido